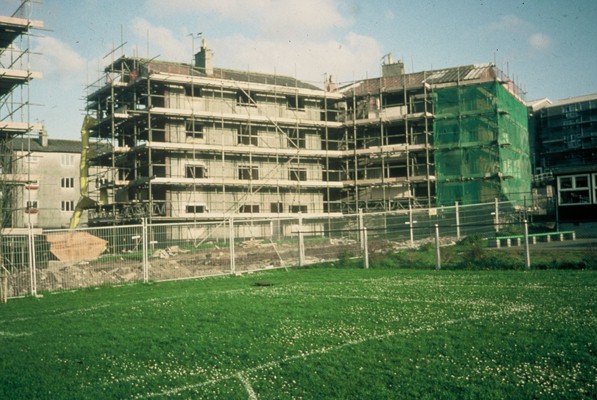 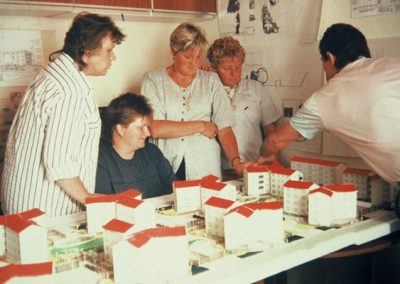 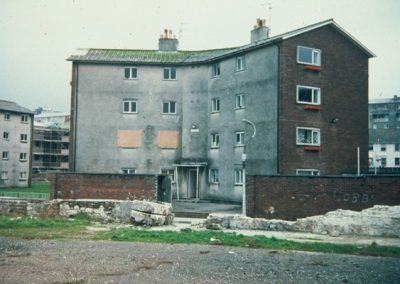 Birth of the EMB

Plans continued to prepare for the establishment of an Estate Management Board, one of a number of new types of housing management organisations companies established under the new ‘Right to Manage’ legislation in 1994. see http://www.housingcare.org/downloads/kbase/2068.pdf.

Rather than pursue the option of appointing contractors to carry out the management and maintenance on the EMB’s behalf, residents pursued the aim of creating further local employment by embarking on a programme of training and an expansion of a local skills register to seek potential employees for the new company. The aim would be not just to manage and oversee the work of others, but to directly deliver the housing management service.

The number of vacant properties on the estate continued to rise as the flats were no longer being re-let in anticipation of the commencement of the refurbishment. Many residents took the opportunity to move out, not really believing that the plans would come to fruition and not having the confidence that Devonport had turned a corner and would become a popular place to live once more.

A ‘shadow’ Estate Management Board was established with work continuing in preparation for ‘going live’ as a registered not for profit company.  Work also began on raising awareness of the expected benefits of the scheme to prospective new tenants. It was recognised that to sustain the benefits of the physical regeneration, the new company would need to actively promote the benefits of local management and be involved in making allocation decisions.

An allocations policy was drawn up where residents on the city housing register who wished to move to Pembroke Street could add their names to a special waiting list.  When a vacancy came up, they could meet with representatives from the EMB and the city council to talk through the expectations of being a member of the EMB. It was a way of placing a value on the tenancy and letting residents know the EMB was there to provide a better service, but also that there were some expectations on the residents about being a responsible tenant.

The EMB staff team were recruited. All were residents from the estate who had relevant experience to bring by virtue of living in Devonport. Having been involved in bringing forward the regeneration scheme, they had acquired invaluable knowledge and experience, which was supplemented with additional formal training where required.  Read more about the training and employment opportunities programme here).

The estate refurbishment took place between 1993 and 1995, during which time four blocks of flats at a time were released to the contractor and residents moved to temporary properties while their home was refurbished.  The newly remodeled flats were stunning and even though the residents had regular opportunities for site visits while the works were taking place, nothing prepared them for the final transformation when they received the keys to their flat on handover.

The EMB began to operate in 1993 and was officially registered as a company in June 1994.

In 2009, Plymouth Community Homes (PCH) was established as a new social housing provider, taking over the entire Plymouth City Council (PCC) housing stock following a large scale stock transfer.  The EMB was transferred at the same time with a new revised management agreement introduced, governing the relationship between the EMB and PCH.

Read about the onward journey to the success of the EMB here.